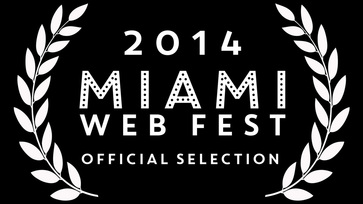 June 21, 2014
Happy Summer, everyone! We've got people at the beach, Brooklyn's got the Mermaid Parade wrapping up, the sun was shining, the breeze and easy.
What's that on the side there? Huh?
OH, THAT.
Earlier this month we received some AWESOME news: Second-Hand NY is an official selection of the Miami Web Fest taking place this October. We've been putting together their requested files and submissions and are so so so so thrilled. Look out, Miami! We're coming for ya! 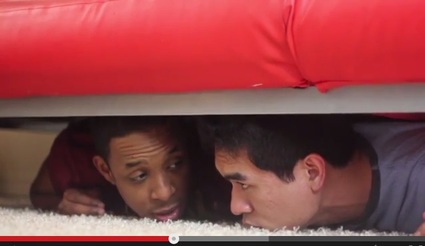 April 8, 2014
We're still working. Not done yet - these episodes need to be perfect, damn it!
Until then, here's a screen shot of one of our unfinished episodes. We won't tell you which episode. We won't even tell you if we're gonna use this shot. 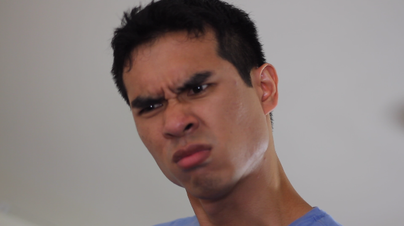 September 2, 2013 - Laboring away on Labor Day
We've started editing the first few episodes. Audio sync will take place very soon. There isn't much that we can tell you without giving away the surprises we have so we found this screenshot of Patrick. Won't you make it a meme? Send it to us @SecondHandNY on the Twittersphere, email it to us at SecondHandNY@Gmail.com, or share it with us and the world on Facebook!
Go ahead. Meme him. Meme him all night long. 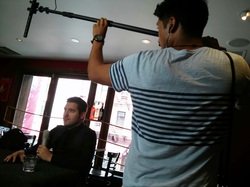 July 20, 2013 - THAT'S IT! We finished filming!!
Now the hard part begins.
Thank you to everyone. I mean everyone. Those who have held a mic, focused the camera, said one line, gave us a space to film in, visited our social pages, wished us luck, and YOU reading this entry. Thank you for being there. With our amazing equipment, handful of talent, and just a pinch of good vibes, Season 2 will be a whole new world compared to Season 1 and it's because of you. Time to edit like crazy people and put together some pretty great episodes for your enjoyment.

June 15, 2013
This last shoot was a lot of fun. We kind of wish you were there. Oh, and Pio Pio is delicious. That just needs to be said.
Now - We're on vacation! I lied. We just won't be shooting anything for two weeks but that doesn't mean we won't be working, marketing, or EDITING. We'll be thinking of you guys as we select the funniest of the funny and send them off to battle. 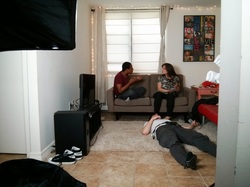 June 9, 2013
It was a packed weekend and SO many guest appearances from a bunch of talented people. Thanks to everyone that endured the many hours in an apartment with windows closed because we had to block out sound. Thanks to our crew who were willing to shoot things over and over. And over... and over.

Sometimes you lose sight of what you're working towards and just want to step away. That feeling only lasts for about 5 seconds. Look around you. Think about what brought you there in the first place. Consider the people that share the journey. Realize you chose this and it's a part of you now. We are really proud of what we've done so far and cannot wait to share with you all. Maybe you'll share with us, too!
- Second-HandNYer: Julie 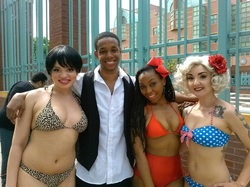 (Two weeks later...) Sorry about that. We have been just a little on a busy side. Shooting in Central Park, Pierre Loti Midtown, and Corona, Queens - and that was just THIS weekend. Over to your right you see a smiling SecondHandNYer Ariel posing with our lovely ladies in one of our season 2 episodes "One Fine Day" and what a fine day it was. Who can stop traffic? These ladies. Take a gander at what they're all about HERE! We're just about at the half-way mark with shooting the entire season but don't whip out the popcorn yet. We still have editing to do. >:( 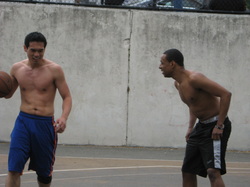 No, the guys aren't messing around playing basketball when they should be working. Well, they were but only for a couple of minutes! More actors and crew are getting involved for this season and we are loving it. Poor Julie had her nose raped by tree pollen when we were trying to shoot all day. Oh, and thanks to that homeless man shouting obscenities in Spanish. We wanted to get your name to credit you but, frankly, we were scared. 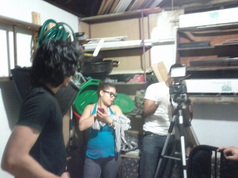 We did our moms proud on Mother's Day by working hard. Elmhurst, Queens has a lot of stray cats, by the way. None made any appearances and we're SORRY because we know how much the world needs more cats. When you get the chance send birthday wishes to SecondHandNY-er Ariel! Our cast member gets older on the 13th and we should show him some love! 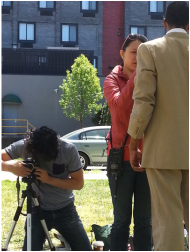 Day Two of the shoot was a success. Sun was shining, camera was rolling, and we even got a few members of the Corona, Queens community involved. This season, we meet some family members, make new friends, and delve a little deeper into our characters' brains. Place your bets on who gets killed off first! Just kidding. We don't gamble.
April 29, 2013
Thanks to everyone that donated and supported us! March 18 was our final campaign day and since then we've been writing, editing, meeting with different people and BOY are we pumped! We were able to get new sound and video equipment and got the ball rolling this past Saturday. It was a full day's work but every minute is worth it.

Our Story:
Once upon a time in college there were three friends: Ariel, Julie, and Patrick. They went to theatre classes together and spent their spare time making jokes. One day Julie and Ariel were working on a film project and they thought, “we should make funny stuff together!” Another day, Julie and Patrick had the very same conversation. Light bulb! Second-Hand NY was born via cesarean.

The first season was a struggle, but it was completed. With it came fans - real fans! From one social network to another and word of mouth people were enjoying what Second-Hand NY was bringing to the table. After tirelessly working on 8 episodes with 1 camera and a billion improvisations they realized their visions of comedy could be so much clearer and full of light from a super nice lamp if they had some help. The team felt it was time to give the fans a second season using better equipment, learning from their mistakes, and do what they do best: entertain.

Our Campaign:
The $5000 will go towards a new boom mic, body mics and a digital recorder to try and record the best sound possible, although that is the most important thing to the team right now, they are aiming high in order to have a chance at buying a new camera (Canon EOS 5d Mark 2) and LED light stands.